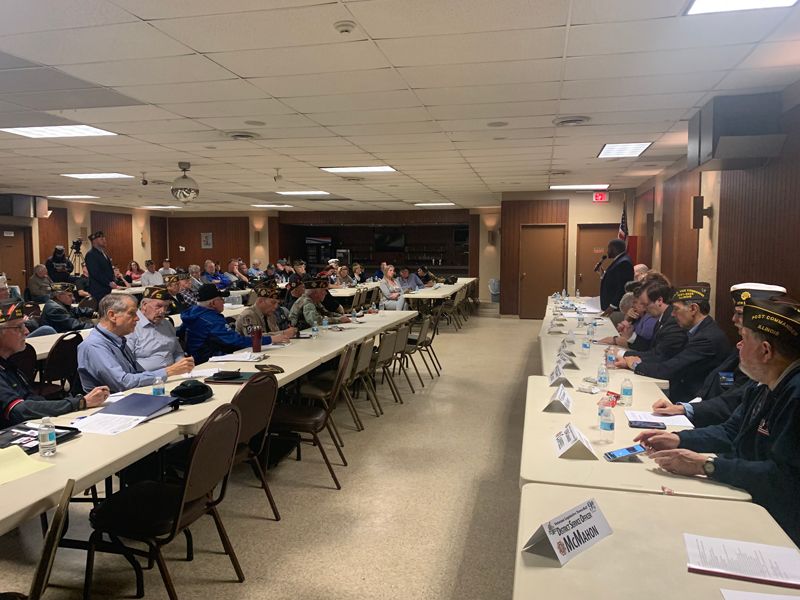 During the two-hour meeting there was no shortage of questions raised by the veterans in attendance. Many of them dealt with suggestions of new legislation. Of these, one of the most important was real estate tax relief for the many posts that own their meeting halls. They are non-profit organizations, several of which are fearful of losing their buildings due to high tax bills. Other suggestions included additional assistance for female veterans faced with sexual discrimination issues.

There was some good news to report also. Earlier this month two bills that help veterans were passed by both houses of the legislature and now await only signature by the Governor to become law. HB2775 amends the Illinois Homeless Prevention Act to make it easier and less burdensome for veterans and their landlords to apply for assistance and prevents landlords from interfering with such assistance. The bill also amends the Illinois Human Rights Act by making it a civil rights violation to discriminate based on an individual’s sources of income in all real estate transactions. Rep. Kifowit announced the recent passage of HB 257 which makes it a crime, enforceable in Illinois state criminal courts, to violate an Order of Protection issued by a military tribunal. Prior to this bill, such orders could only be enforced by the military court that issued it.

The principal organizers of the event were Mike Peck and Dutch DeGroot, Co- Assistant State Chairmen for Legislative Affairs of the VFW Department of Illinois. DeGroot, reported that the veteran response to the Town Hall meeting has been "overwhelmingly positive”. He said that more such meetings are probable.